In this blog we explain why you should build video banner ads. Why they add another dimension to digital marketing campaigns. And, why creating remarkable video banners – as well as ads cross channels – isn’t as difficult as you first think.

Video banners are more important than ever

In fact, whether in-stream, outstream, or in-banner, the use of video is growing rapidly within digital advertising. In Europe alone, online video display is multiplying three-and-a-half times faster than non-video display. It now accounts for one fifth of the total display market in Europe according to IAB Europe.

While, US advertisers are expecting digital video advertising to increase from $17.87 billion in 2018 to $29.61 billion in 2022. This is growth that cannot be ignored.

Outstream video is popular and growing

Furthermore, according to eMarketer research, the most popular type of rich media display ad is now outstream video – that is, video ads that play outside of other video content, think Youtube, social, etc. Outstream can include locating video ads between paragraphs of text, or within banners.

However, it is worth noting that there is a growing distinction between outstream video and in-banner video usage. Yet, there are also points of convergence. For example, it is now possible to build video banners and outstream video within the same ad production platforms.

But what are reasons for advertisers producing more video banners than ever before?

Why use video banner ads?

Without a doubt, video banner ads are a great asset for digital marketers wanting to create engaging campaigns. A video ad offers dynamism, and can grab your audiences’ attention more than static images ever can. Moreover you can even experiment with the narrative within the ads and even target specific viewers thanks to dynamic creative and programmatic technologies.

Also, imagine having a great video campaign but you’re unable to target a specific publisher’s audience, as the publisher offers no in-stream video option. The perfect demographic for your brand, and you miss out! However, just because the publisher  doesn’t offer in-stream video ad placements, doesn’t mean you are aren’t able to buy video ads for that site. Rather than overlooking the site and missing out on viewers, you instead can use outstream video. Which within it’s broad spectrum of ad types, includes in-banner video.

Video banners can help brands to bridge the gap, with all the added benefits of responsive HTML5 display advertising.

So, what are the benefits of using video banner ads as part of your display advertising strategy? What are the different types of video display ad? And how do you create them?

First of all, there are different types of online video ad. Not all can be used together with programmatic, and each offers something slightly different.  Also, not all practitioners include in-banner video under their definition of outstream. With some advertisers, drawing a distinction between the two formats. So what are the different types of video ad?

In-stream video ads are ads that play before, during or after streaming video content that a consumer has requested. Typically, these are pre-roll, mid-roll and post-roll video ads. In-stream ads typically cannot be stopped from playing unless/or until a skip option appears. A key difference between in-stream and outstream video is that the latter are not the primary focus of a page.

Outstream ads normally play only when they’re at least 50% in-view, and are automatically paused if the user scrolls past them. In most applications, the sound is off by default and activated only if the user clicks or hovers over the ad. Outstream video ads are usually not rendered in a prominent video player, nor the main focus for the viewer on the page usually.

Typically, this type of video ad is found in–article, either via scrolling or slides; natively, mimicking the editorial space it inhabits; or within a social media feed.

Technically, according to the IAB this is also part of outstream but for the proposes of this blog, we’ll separate it and provide a definition. Again according to the IAB this is a video clip that exists within a web banner. It uses the normal space provided for a banner ad to deliver a video experience as opposed to another static or rich media format. It also relies on the existence of display ad inventory on the webpage for delivery.

However, the beauty of in-banner video is it allows you all sorts of additional benefits and interactivity. For example, the use of data feeds, or as part of dynamic rich media banners.

What are the advantages of in-banner video ads?

Another reason for the growth of video banners is user experience. According to industry experts it’s a nonforced advertising proposition. If a user doesn’t want to engage with the video ad, they scroll past it. If they do want to engage, they interact with it. Well crafted video banners provide the viewer with a positive choice.

Plus, through the use of HTML5 banners you have many options in regards to how you use video banners too. On a basic level a video can be used as the background for a banner. Or more creatively, it can be part of the banner animation. For example, a trailer that ends with a call-to-action (CTA) frame. HTML5 also makes creating banners that use video easier to mass produce.

It’s understandable why so many brands are looking to start using them. The good news is that building great video banner ads that convert can be as hard, or as easy, as you want it to be.

How to build video banner ads with code

One way to make video banners is by manually coding them. And yes, there are quite a few online tutorials and guides showing you how to do this. While this can be an excellent opportunity for you to develop and show off your coding skills, it’s also time-consuming – especially if you are not a developer.

The fact is, manual coding makes it difficult to scale out your video banners into different sizes and languages. Try to target more than one market, in more than couple of sizes and you’ll find your time disappearing quickly.

There are, of course, easier ways to build banners, and of the best is by building your campaigns in a creative management platform (CMP). Using a purpose-built platform allows you to scale out a campaign and – if we’re truly honest – save you money.

How to make video banner ads with Bannerflow

With Bannerflow, the production of in-banner video ads couldn’t be simpler. Within Bannerflow, there are easy-to-use video widgets, which make placing video in your banner a breeze. There are also widgets for embedding videos hosted on Youtube and Vimeo. All of which makes creating video banners hassle free and painless.

To put it mildly, using Bannerflow’s video widgets is a much better solution than manually coding a video banner. As well as being faster for building a single banner, using a creative management platform means exceptional scalability. Building an entire in-banner video campaign, of different sized banners, across devices, and markets, can take minutes, rather than days.

Plus, use a CMP like Bannerflow and you can manage a campaign in real-time too, optimising your in-banner videos via analytics.

Another thing to mention, is  that viewership of digital video is evolving. The most obvious of which is that Millennials and Generation Z are more at home watching short-form videos on social platforms than traditional live tv.

While, across the board consumers are, day-in-day-out, engaging more with a variety of video formats: B2B marketing via Linkedin video a prime example. The message is: that advertisers must reach consumers through a range of video formats, which work across channels and devices. Staying in one channel will not reach different audience segments.

Be adaptable and agile to change

This means being able to react quickly. For example, video completion is less relevant for fragmented video channels like Instagram Stories or Snapchat, and in-banner ads on mobile. Indeed, this is why Google is switching to simpler six-second ads instead of more traditional skippable outstream video. The lesson for advertisers? You need to be adaptable when producing effective digital video campaigns.

Moreover, being able to adapt and scale your video ads is also key. Plus, remember longer digital video ads, 30 seconds or more, are no longer appropriate for the way content is consumed via certain channels.

And here’s where things get exciting for those digital marketers who use a CMP. A bonus of using a CMP for the production of in-banner video is that some (for example, Bannerflow) offer a digital video ad export feature too.

What this basically means is that  in-banner video can become an MP4 video, which can then be used and uploaded across a multitude of channels and video networks. Essentially, who can create outstream videos at the same time as your in-banner video campaigns.

Here are a few top tips when creating in-banner videos:

Digital video advertising is increasing, and if you haven’t already done so now is the moment to make it part of your digital advertising plans. What’s more, with the development of the creative management platform it is now far easier to build both in-banner video, as well as all the different ad formats your omnichannel campaign requires.

Whether you go in-stream, outstream, or in-banner, being able to build and control your digital campaigns, in-house is also getting ever more important.  But the truth is, whatever route you choose to go down, make sure your design is remarkable, and converts. And if not? Well, make sure it can be optimised too. Good luck!

If you’re interested in learning more about how you can create advanced HTML5 banner ads, including video, without any code then checkout what the Bannerflow creative management platform can do for you.  You can either apply for a demo or contact us directly for more information. 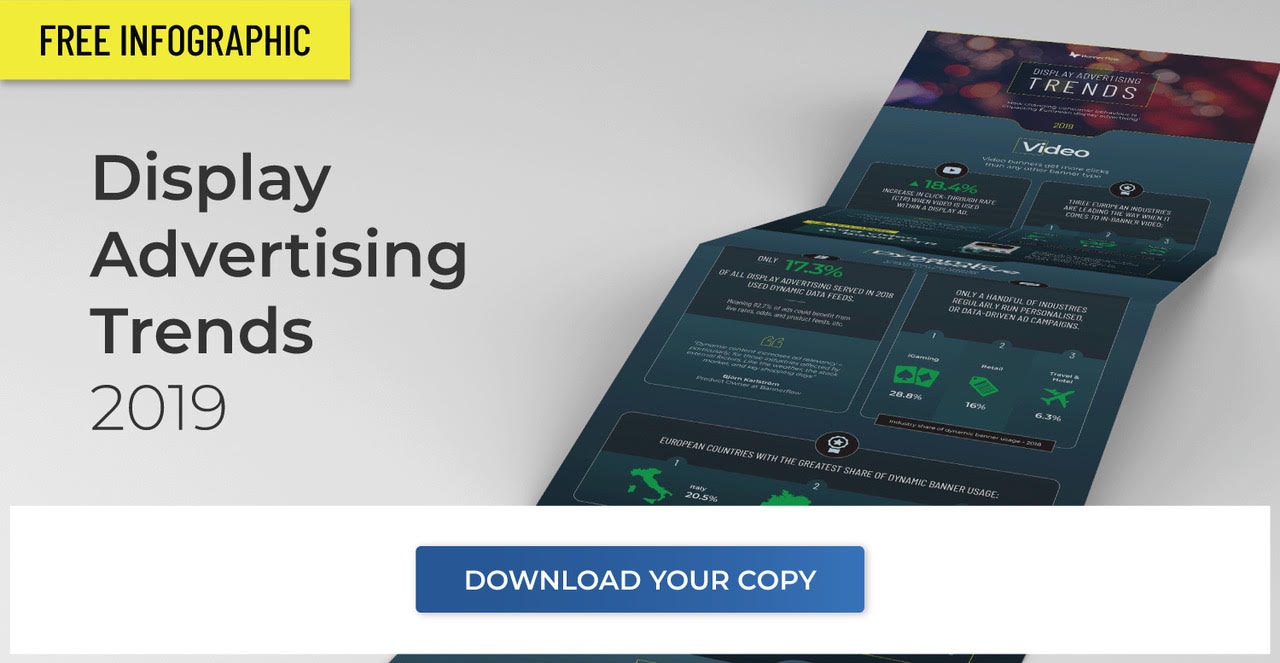 Mobile banner ads play an important role in today’s marketing mix. They are digital advertising that is engaging, relevant, and growing. Yet sometimes they are also poorly designed, irrele...
We’ve updated our article on display advertising best practices. Read the ultimate guide instead! Every year we update and review our best practices guide for display advertising. Wit...
Designing a creative banner campaign can be a long, complicated process involving many different people. The longer the process gets, the easier it is to forget certain steps, or ignore cert...
Designing mobile banner ads is, fundamentally, like designing anything else. It needs to look great, attract the audience it’s intended for, and ultimately convert. Previously, Bannerflow...
Think improving your click–through rate (CTR) is all about design? That’s where you’re wrong. The average internet user is served 1,700 banner ads per month. We’ve all heard the stat...